SPIEL, in Essen, Germany, is incredibly weird. It’s a four day festival of boardgames, which gets 180 000 visitors each year, and is spread out across a seemingly endless series of convention halls. It’s like visiting an alternate universe, where boardgaming is the most popular sport in the world: snaking queues to get boxes signed by designers, crowds pushed against tables displaying new releases, huge advertising banners for niche companies, a bus branded with the logo for Settlers of Catan, hotel bars full until late at night with people playing the games they acquired during the day.

It’s a trade fair, really. An enormous shop. I went with my dad and my brother, and we spent most of our time moving from stall to stall, getting demonstrations of whatever the publishers and designers were selling. By the end of the weekend, I’d played 35 games that were new to me. These were mostly shortened versions of full games (the publishers want to demonstrate to as many people as possible; we wanted to try as many different new things as we could), so don’t take these as final reviews. But this should give you a good idea of what they felt like. 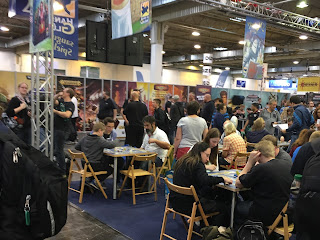 Read more »
Posted by Calum A Mitchell at 15:06 No comments: