A poem from 2013, written on the notes function of a mobile phone, which is my excuse for the metre sometimes being a bit of a mess. 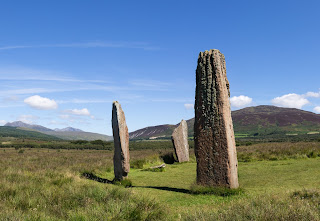 A dozen miles since dawn in the frozen
Fog, and the weathered Scots in front refuse
To tire. I'm drunk on cold. No: more than drunk,
Already face down, collapsed in gutters
Barely human and barely breathing. Christ,
Can't they understand? It isn't human to walk
This far, this fast, in this tight, relentless,
Brutal chill.


The overgrown fields are stiff
With frost. It's too cold for snow, but they lie
Blue with ice under the clouded light of
A heavy sky. Storm coming, just like all
The other bloody days. Maybe something
More than plantlife lives in those brittle
Fields. I doubt it. Hope never got me far.

Still we tramp. The woman in front has new
Boots. All these Scots do. I do not. And as
I march on this tilted slither of cracked
Tarmac (the remains of a better world)
I feel the boots begin to give way. The
Same feeling as yesterday, the day before,
The day before, the day before. I glare
At the boots in front. Enviously I
Sneak looks at the jackets, battered leather,
Worn but hardy, shielding out the winter.
They wear goggles, masks, or stride in long coats.
I dream of long coats, as I used to dream
Of silk and silver. My own clothes feel thin
Beneath the onslaught of the air. Patched and
Woollen, they'll warp and whither in the rain.
I look nervously to the heavy sky.

Perhaps I'm not the first one to see it.
Above the dense and ghostlike haze of fog,
A shape flutters, silhouette before sun.
Some of the Scots ready their weapons. I
Almost clutch mine. But then the cry goes up:
'A Bird!' A bird! In these ungodly skies!
We haven't seen an animal in weeks.
She dives, she falls, a shadow in the dense
Grey light. And then she rises. One can just
About observe the definition of
A wingtip, and in the mind's eye one feels
The curved, hungry beak, the brace of talons,
The coiled muscle battering the air.
And then she's gone. She flashes out into
The whiteness instantly, as if someone
Had turned off a screen. These men see too much
To firmly believe in portents, but if
A supernatural joy is absent
From the troops, perhaps there's still a touch
Of succour from the sight. Perhaps the bird
Sated some unacknowledged hunger. We
March on.

They do not like me, these soldiers.
Fresh from Glasgow's wreck, with hurricane eyes,
They grip their rifles with unyielding calm
And stare at the horizon - as if Earth
Were a disappointing game. God knows if it's
An act. Yes, they hate my guts, these stiff-backed
Soldiers, with their thick and bitter voices
In thick, bitter accents. They can march and fight
Like rusted machinery, burning oil
Powering clanking, jagged veins. I march
Alongside these weathered, broken giants,
And they are rightly suspicious of me:
A slinking, weaselly English merchant,
Avatar of the ambitious middle
Classes. Yes, there's a world of difference
Between me and these Scottish monuments,
And we both know - that if the need arose -
I would betray them in an instant.
But at the moment, I am not a threat
And this blank-brained rabble of stern fighters
Is all that stands between my life and death.

A stop is called. Our noble protector
(The lovely Anna, clad in steel and scowls)
Raises her tight-gloved hand, displays her palm
To the assembled company, and barks
The order: 'halt!', and, with a smile, 'You've been
Marching since dawn. You bastards deserve rest.'
The troops won't even mutter gratitude.
Instead, it is as if the muscles in
Their backs relax. They have become aware
Of how bitterly hard they've slogged today.
Their frames collapse, as if with shame. Well, I
Don't feel ashamed. Why should I? They are quite
Aware that I am weak, untrained, more than
Debased by all this suffering. And so, alone,
I lie upon the ground, staring up at
The blank white sky. The soldiers muttering
Around me pay no heed. They have their own
Concerns, their own suffering to enact.
A man behind me laughs a hollow laugh,
And the familiar sound of dice on rock
Is heard. (I sold a fair few of those dice.
Amazing what luxuries hungry
Soldiers are willing to pay for). Meanwhile
My aching body rests and I commune
With empty air. No thought but my naked,
Unwashed face and the weak and distant sun
Above it. I can ignore the hardness
Of the frosted road, and without movement
My limbs rejoice. I almost fall asleep
But a spark of self-preservation burns,
And I remember that it's more than likely
That this noble regiment would leave me
On the road to die. Alas, one cannot
Pick one's friends.

My reveries are ended
Before the troop moves out, by a raindrop,
Exploding like icefall, screaming bitter
Murder through my waiting neurons. With
Grim predictability, the sky starts
To swarm with static as the storm begins.
Let the drenching commence. Anna raises
Her hand once more - there's little point resting
In the rain - and the resentful soldiers
Will themselves to action.

And so we march
We march, we goddamn march again, just like
Every other hour of every other
Goddamn day. As if the cold relentless
Monotony were not enough, this rain,
This goddamn rain scars our bruised skin. It seeks
Out and infiltrates each miniscule crack
Or tear or fault in the fabric of our
Clothing. I am marching through a white wall
Of pain. A white wall of pain, and my skull
Is screaming.

We will march for hours. There is
No other choice.

In time, my mind, afraid
Of the burning cold, turns aside. I march
Wraithlike, the pain real but distant. The rain
Is burning someone else; my thoughts turn back
To Glasgow, and gunfire. The docks piled high
With corpses, and the stench of burnt plastic,
As drones dance and duel below a blazing
Orange sunset. Pursued down burning streets
By the low whirr of a faceless monster,
Whispering through the air behind my back.
I trip and tumble, hurtle through the smoke,
Its dread electric mind hears the pumping
Of my blood, the battering of leather
Shoes on broken glass. A bullet drifts past
My shoulder. I can't breathe in this smoke-clogged
Air. Faster, faster, faster. Death will come.
I know it. And as I dive to the best
Of my quite limited abilities.
The drone plunges on, thoughtless, endless, free.

The rain has stopped. I can't remember when
This happened. Somehow, dusk has drifted down.
Somewhere, beyond the fog, the heavy sun
Is setting. I feel my bones crack under
My body's truant weight. I know we won't
Trudge much further tonight. Soldiers begin
To pull torches from their pockets, and light
The dark mist.  A shape forms in the twilight.
It's by the roadside, some distance ahead.
And as the night gathers around our heads,
The fogbound monument reveals itself.
A wind-whipped ring of seven standing stones,
Grey rock, each standing taller than a man,
Each spaced widely from its neighbours, and hunched
As if against the cold. Their jagged points
Bow faintly down as if with age, struggling
To reach a vast, blind indifferent sky.

Without needing an order, we break ranks.
We pause, then we approach the stone circle,
And I attempt to build a metaphor
That fits the moment. Is this thing a God
That waits impassive for a puny gang
of squawking heretics for it to smite?
Or is it a forest in Winter, the dead
Trees that refuse to speak to us, dry lumps
Of dry wood that signify nothing? No.
These rocks are bones. I imagine, beneath
The hard Earth, an animal's corpse, long dead,
Perhaps once beautiful, or perhaps wise.
But all that remains of its life is here:
A stony ribcage breaking the surface,
Naked and cracked in the unfriendly air.

We walk through the field, between the grey rocks.
The cold wetness of the grass nuzzles us,
But there is a strange freedom here – a break
From the relentless road. The line replaced
by the circle; a reminder that life
Is not simply a thrusting towards death.

And I halt as I pass one of the stones:
An odd charisma in its hooded shape,
Worn raw by centuries of bad weather,
Draws me to it. I place my hand upon
This scar of history. With my finger
I trace lines invisible in the night,
Carvings that are immeasurably old:
The smoothly arching curves of bright spirals,
The sigils of the cults of savage gods:
This place is old. It reaches to the roots,
Of time, the ways of all men and women
Spring from gardens like this. Yes, this is not
A mausoleum, but a living room.
The soldiers mill and mutter through the field,
But are, I think, restrained by something here.
No blood will be spilled tonight.

The fog lifts.
And the stars reveal themselves: hard diamonds
in the Godless deep. The void yawns above.
The moon is an open eye, a marble
battle-scratched, prepared to fall. The cluttered
Watching sky will keep us cool. But Anna,
Builds a fire, and the regiment warms
Themselves around it. I am reminded
Of a ritual I saw, long ago.
But no matter. I am almost content.